Mediterranean Couscous (from the cookbook) 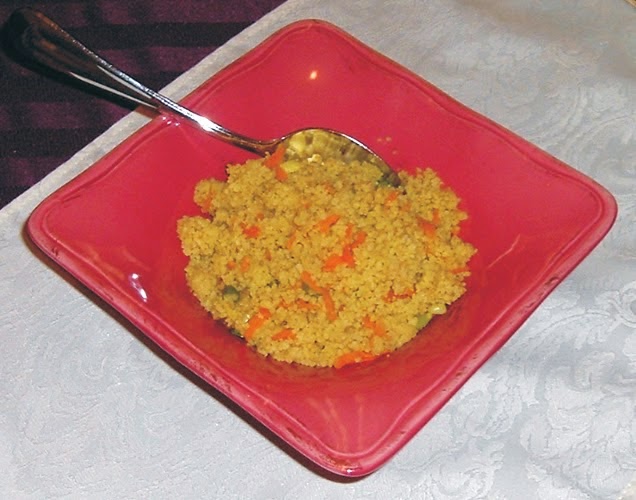 Directions:
Heat oil in a large skillet over med/high heat.  Add the couscous and cook for a minute or so to toast.  Add the curry powder and stir.  Add chicken broth, green onions and carrots and bring to a boil.

Remove from heat, cover and let stand for 5 minutes.

Comments:  I use a mild curry for this so that it is not too spicy.  You could also substitute cumin for the curry.
Posted by Amanda Trim at 4:19 PM No comments:

Candied Yams - A comfort food conversion (from the cookbook)

In the cookbook, I have many recipes which I call "Comfort Food Conversions."  They are lightened up versions of the original.  Although they are not "low calorie, low sugar, or low fat" they are still better for you versions - and with all the taste.

Directions:
Boil sweet potatoes whole until fork tender.  Let cool. Peel and place in bowl.  Add the condensed milk  and cinnamon and blend with a mixer until smooth.  Spread mixture into an 8” square shallow dish.  Top with a single layer each of the almonds and then the marshmallows.  Sprinkle with cinnamon and bake at 350 degrees approximately 25 minutes or until marshmallows are melted and golden brown.

Comments: Traditional candied yams are fattening because of all the butter.  Sweet potatoes on their own are actually very good for you, containing a good amount of vitamins and nutrients.  By making them this way, you are still getting an awesome flavor (even passes the kids' test) and a lot less fat!
Posted by Amanda Trim at 3:03 PM No comments:

How to slice garlic & herbs

This is actually a little video I did for a communications class that I took.  It's a bit low-budget (and amateur) but the information is great none the less!  Check it out. :)
Posted by Amanda Trim at 2:53 PM No comments:

Amanda Trim
Having been raised by an Italian chef, I have always had a passion for food. I find great pleasure in developing recipes and seeing where my mind and tastebuds can lead me in the kitchen! The more I cook, the more I enjoy finding ways to use bold flavors instead of heavy ones to bring out the best that the food has to offer.

Click on the image above to order your copy of the cookbook from Amazon!

How to Get your Cookbook